An evening worship service in English and mulltiple Indian languages

In October, we had the pleasure of having Clement Vedanayagam as guest speaker. 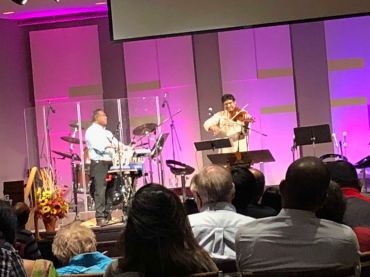 Clement Vedanayagam Sasthriyar from Chennai, India
Clement Vedanayagam Sasthriyar is a seventh generation Sastriyar, a musician and speaker carrying on the tradition of his illustrious ancestors, performing as a violin soloist and building a legacy of faith for the past 30 years, both in India and across international borders, including Singapore, Malaysia, the United States, Canada, the Middle East, New Zealand, and Australia.
Over the past few years, Clement has been passionate about his band, the Gamaz, which is mainly focused on promoting awareness and reviving the heritage of indigenous hymns. He is also a violinist and composer, who learnt both Western and Carnatic music, something he finds a big asset to his music ministry. He has recorded six instrumental gospel music albums. Learn more

Processing…
Success! You're on the list.
Whoops! There was an error and we couldn't process your subscription. Please reload the page and try again.
Loading Comments...